The Chicago Cubs bolstered the top of their rotation this offseason with the acquisitions of Jon Lester and Jason Hammel, but the back end of their rotation is still a big question mark, with several hurlers competing for the final spot in the five-man group.

One of those pitchers that will be competing for a job will apparently be Edwin Jackson, as manager Joe Maddon revealed on Friday that the pitcher will be stretched back out to compete as a starting pitcher. The last two years haven’t been kind to Jackson after he signed a four year deal with the club prior to the 2013 season. In those years, Jackson has a 14-33 record, a 5.58 ERA, and a WHIP of 1.54.

Last season was especially bad for Jackson, as he struggled through poor play, an inability to keep the ball in the yard (he gave up 1.2 home runs per nine innings, his worst number since he made eight starts for the 2003 Los Angeles Dodgers.

With those kinds of numbers, and with players like Travis Wood, Felix Doubront, Eric Jokisch, and Tsuyoshi Wada all competing for a spot, it’s going to be a tough slog for Jackson to crack the rotation, but he’s feeling confident even in spite of the obstacles in front of him.

“I’ve been just looking forward. I haven’t really looked back in the past too much,” he told MLB.com. “Those two years, they were what they were. I’ve been ready, getting in shape and ready to go.”

Jackson was also asked about what it was like to play under Maddon, who managed Jackson during his brief stop in Tampa Bay earlier in his career.

“It’s definitely cool having a good manager,” he told Gordon Wittenmeyer of the Chicago Sun-Times.

That last statement stirred up a bit of resentment on social media, as some fans took it as unwarranted criticism of the job that Dale Sveum and Rick Renteria have done in the past two years as Cubs manager. Most fans who criticized Jackson blasted him for being cruel about previous managers while seemingly glossing over his own failures on the mound for the Cubs.

That is one way to look at it, but it all feels a bit overhyped. Jackson has struggled with the Cubs, and there’s no way that he’s going to be guaranteed a roster spot even though the team is stretching him back out as a starter. He’s merely expressing confidence that he can win the job, knowing full well that there is an open competition for it.

As for the Maddon quote, Jackson is merely saying what everyone in the organization has said and inferred since Renteria was dumped and Joe was brought aboard. Maddon’s hire represents a shift in the focus of the Cubs away from competing to avoid the NL Central cellar to competing for a division title. 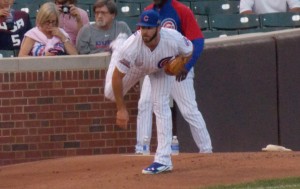 The Chicago Cubs’ pitching rotation was supposed to become a weak point of the squad after they dealt away Jeff Samardzija and Jason Hammel in a blockbuster July trade, but despite the loss of two of their top pitchers, the team’s staff has remained a strength rather than a liability.

Now, with just a few weeks left in the season and numerous games remaining against teams in the playoff hunt, the Cubs will apparently be going with a six-man rotation for at least the next few weeks. According to Chicago Cubs Online, the team will have Jake Arrieta, Kyle Hendricks, Tsuyoshi Wada, Felix Doubront, Travis Wood, and Jacob Turner as their starters for at least two starts apiece, and Dan Straily and Eric Jokisch, who were both called up by the team as the roster expanded to 40 players, could each get a start sometime before the end of the campaign as well.

The decision to start six pitchers instead of five has several benefits, not the least of which is to give guys like Turner and Doubront a chance to showcase their stuff. Arrieta and Hendricks are both going to be part of the rotation next season, and in all likelihood Wood will be as well. Unless the Cubs make an insane splash and add several guys to the rotation from outside the organization (something that Theo Epstein hasn’t explicitly ruled out doing, but still seems unlikely anyway), a guy like Doubront or Turner could feasibly become the fourth or fifth starter to begin next season.

Aside from those two, the guy that will be most intriguing to watch is Wada. In nine starts with the Cubs so far, Wada has a 4-2 record, a 2.79 ERA, and has a WHIP of 1.084. His SO9 is a respectable 7.7, and his strikeout to walk ratio of 3.14 is just as impressive. The 33-year old could be the type of guy the Cubs could feasibly trade for younger pitching help, and giving him a chance to showcase his stuff at least a few more times is a savvy move by Epstein and company.

Hendricks will be the next Cubs pitcher to take the bump when he tries to help the Cubs sweep the Milwaukee Brewers on Wednesday night at Wrigley Field.